The Gold Division and the Mississippi Crew join the fun in the second week of the Select Series. This week we take a look at what the rest of the league has to offer as the Golden Boys and the Magnolia State get started!

The Mississippi division of the 13u decided to join the party with a slugfest with the SBG SOX McQueen coming out on top, but not unscathed with a tie to the Blazers. Speaking of the Blazers, they are tied up with the East Coast Sox and both are close on the heels of the Magic Baseball Academy. The Mississippi flavor of Knights Knation (Yancey) played three demanding games this weekend but couldn’t quite pull it together into a win. No doubt this division is looking to be extremely competitive with the addition of East Coast Sox Mosley still to make their first appearance. This division could see any team coming out on top by the end of the summer. 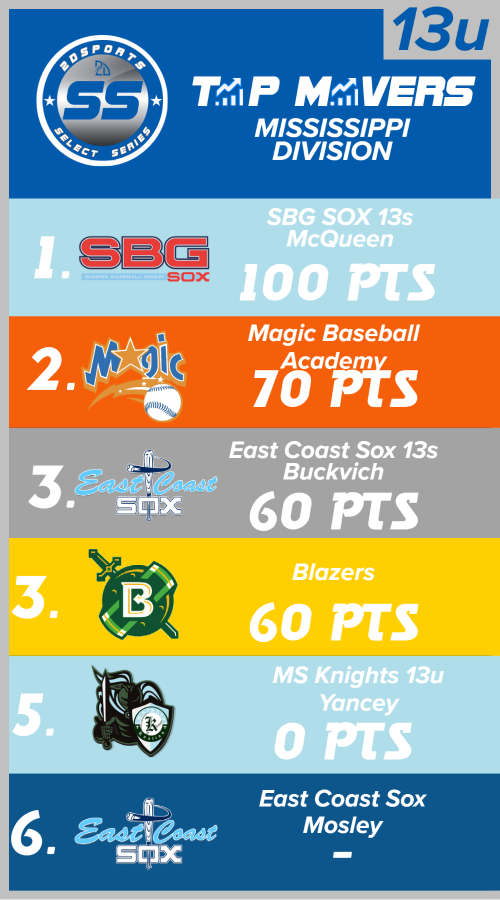 In the Mississippi Division of the 14Us, we see the SBG SOX Adams with a commanding lead after the first week, 50 points between them, and the second-place Knights Knation MS. The Sox’s perfect weekend of four wins is the outlier for this division as Knight’s Knation and the Athletics both went 2-2.  GRIT rounds out the bottom of the list. Grit’s record doesn’t do them justice, losing three of their games by only 2 runs. With a long season ahead, a lot of shakeups are bound to happen with these 5 competitive squads. 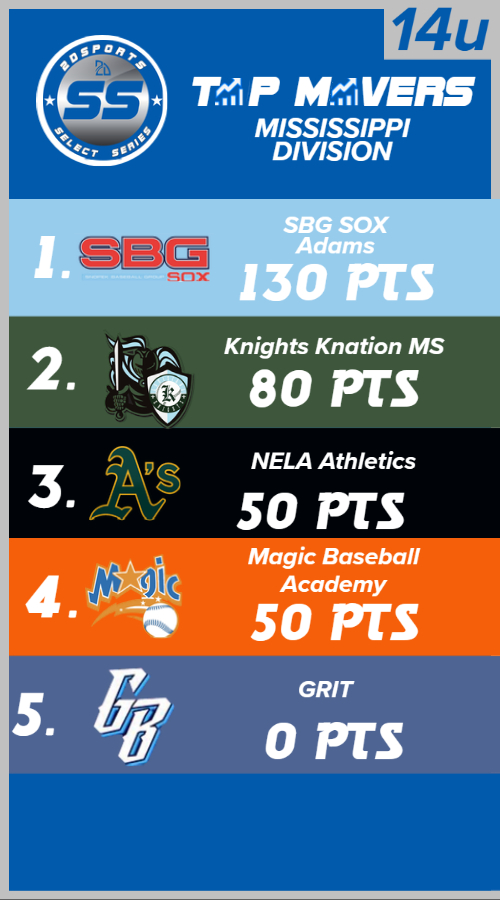 If you were to look at the Wildcat’s record, it would look a lot like their logo — a lot of Ws. Sitting on top of the Gold Division, the Wildcats had a few close games throughout the weekend against the Ascension teams. Ripzz Baseball Academy ended the weekend with only one loss against the Giants with Ws collected from Taylor and the Giants with a tie and a loss to party crashers Knight’s Knation Spring. The Tsunami managed to stay above sea level with three wins and only one loss. The Giants and the Sun Devils sit below the surface with one win each this weekend and Louisiana Nationals Taylor at the bottom with nowhere to go but up over the season. 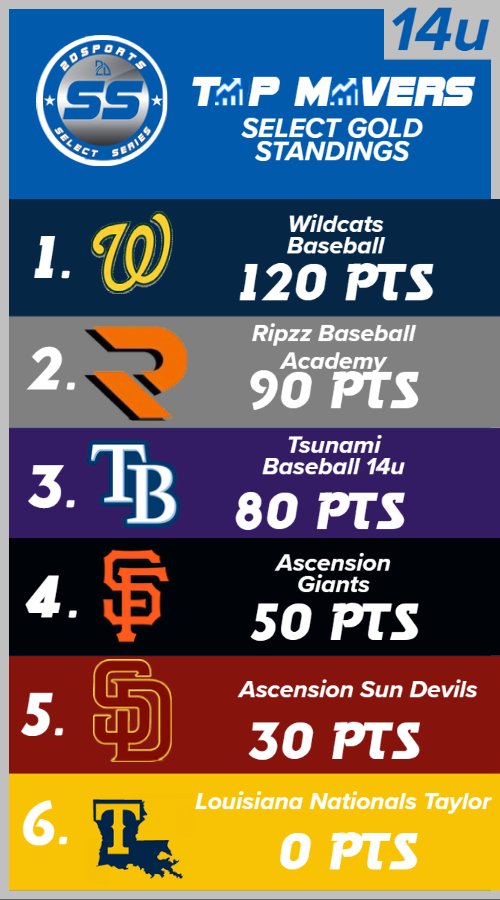 The bats were alive Saturday afternoon as the battle of the Sox brought 14 runs on 13 hits. Not deterred by the white-hot bats, Gabriel Gilmore and Parker White of Buckvich both started seven batters out each with first-pitch strikes. Jones Roberson led the contest in strikeouts with 3, and Gilmore escaped his two innings pitched without giving up an earned run. The Buckvich staff kept it in the strike zone, only giving up one free base through their five innings pitched. Graydon Walker had a day at the plate with a double and a triple with 2 RBIs. Polson and Roberson also contributed to the run count with two of their own RBIs for McQueen. Across the field, Dylan Varnell, Gabriel Gilmore, and Noah Willams all hustled for doubles. Varnell was also responsible for 2 RBIs along with Parker White. With the bats alive and great pitching from both sides, the battle of the Soxs will no doubt prove to be an exciting matchup through the season.

A high-scoring affair between BPA and GRIT in the Saturday afternoon game came down to the last inning. GRIT started the game out with three runs in the first and second innings before BPA took control of the game, scoring eight runs unanswered in the third and fourth innings. Brew Mixon and John Parker Moak hit triples during the contest, both responsible for RBIs. The RBIs were spread around well between both teams with John Parker Moak and Kade Luker both batting in two each for BPA with Hernandez and Turner each bringing in 1. Even more RBIs on the GRIT side with Jackson Gaskin bringing in two, Moton, Fuller, Mixon, and Horton all contributed to the total with one RBI each.  The difference in the contest seemed to be walks and timely hits by the boys from BPA with 9 walks and 6 RBIs on only 2 hits in their win over GRIT.

An absolute battle on Saturday morning as the Louisiana Nationals Taylor gave the Ripzz Baseball Academy everything they could handle. Tied at 8 in the last inning, Dirk Dubois drew a walk to bring things to a close. The anti-climatic ending did no justice to the amazing showing by both teams with both teams combing for a total of 15 hits and eight RBIs. The 8 RBIs came even between the two teams with 4 each. Hutchinson, Forbes, Vitter, and Stewart each pushed a teammate across home plate for Taylor. Ripzz saw Dubois, Beatty, and the two Hueglers each bringing in a run. Not many extra-base hits in this contest with Tyler Beatty having the lone double of the matchup. Stolen bases galore as both teams ran rampant around the diamond for a 9 between them with Kayden McMorris of Taylor and Brody Knapps of Ripzz each with a pair of stolen bags.

Opening weekend of the Mississippi & 14u Gold #2DSelectSeries was a blast!

Here are some of the top highlights of the weekend & more can be found at @2DyouthMS! pic.twitter.com/RATvd0rJcu 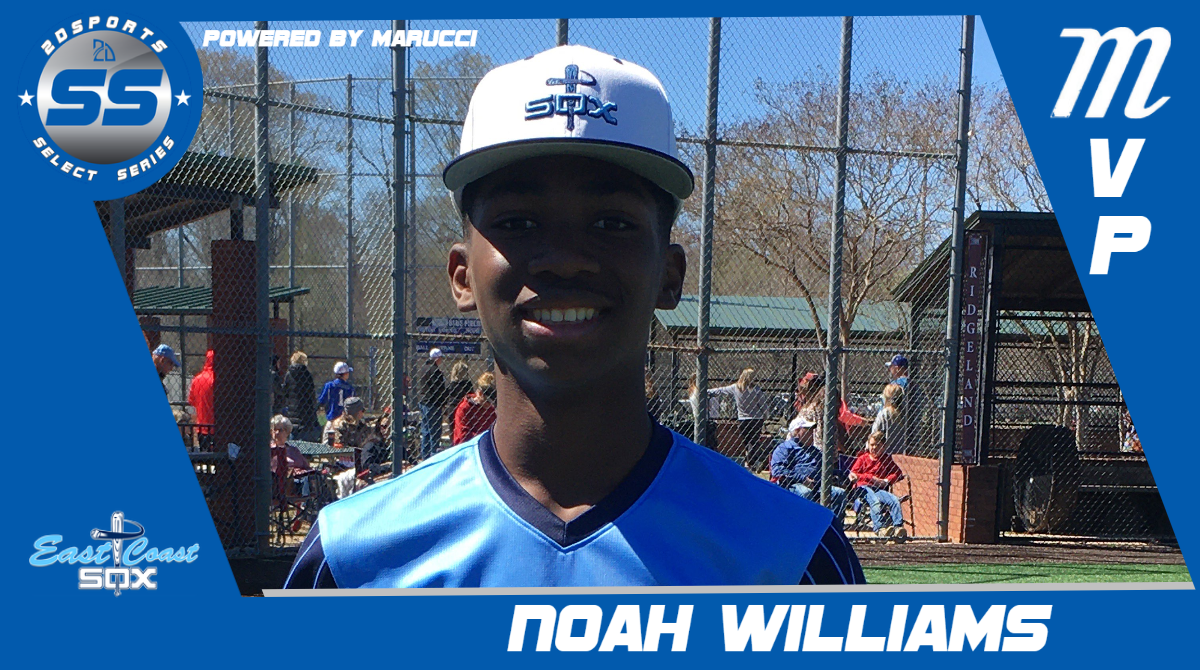